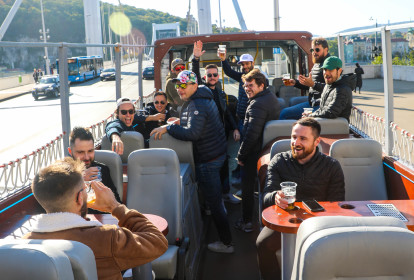 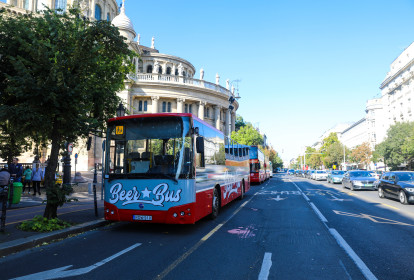 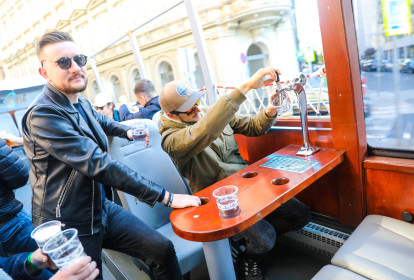 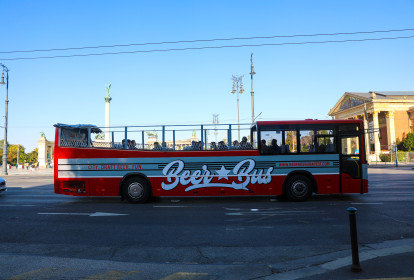 How Much Beer Can You Chug In Sixty Minutes?

Book a one hour beer bus ride around the alluring capital of Budapest today. The Beer Bus will take your group of mates around the alluring Hungarian capital while you take in the city's top sights like the stunning Hungarian Parliament Building and the impressive St. Stephen's Basilica from a completely different perspective. Your bus will be filled to the brim with beer for you guys to get your drink on, and one of our hostesses will look after you. Let's see how much beer that stag of yours can consume before the sixty minutes run out.

This Budapest stag do activity will show who the real lightweight is in your group.

Your stag party will start off the day by meeting your tour guide at Bajcsy Zsilinszky Street 16 in Budapest's city centre. There, your big beer bus awaits.

The bus itself is 100 percent electric, so there's no pollution involved in the activity. Depending on the time of year, the bus will either be fitted with a heater in the summer or, if it's the summer, you'll more than likely have a fan onboard. All sides and the rear window of the vehicle are made of plastic transparent duct, so according to the weather, it can be totally opened or closed. We've got you lads covered for all types of weather.

On board, one of Pissup's hostesses will be there to serve you unlimited beer for the duration of your beer bus. Yes, you heard correctly — beer for the whole trip. This could be a recipe for disaster. The beer is served in 100 percent environmentally friendly glasses, so again, there's no pollution involved.

To get you guys in the mood, you can listen to your own music on the bus's sound system. Let's hope someone has good taste.

The Beer Bus tour will last for one hour. Within that time, you'll be taken on a well planned route around the capital to see the city's main sights. Your route will depend entirely on the traffic situation in the city that day.

Once your tour of Budapest is over, you'll be dropped off at the same location where you were picked up. By then, you'll want to continue on with the stag celebrations deep into the night.

What You Should Know Before Booking The Beer Bus

+bottle of prosecco for beer bus

Book a one hour beer bus ride for your pal's stag do around the alluring capital of Budapest today. Enjoy seeing the sights while sipping some ice cold beers

Send Us a Message
Create an itinerary
Activity Added. What's Next?
+ Add More Activities
See your itinerary >
Add Beer Bus
How can we best help you?
Do you want to change destination?